“40 years at the coal face of modern popular culture. Man and boy. Dedicated to the purveyance of popular music of quality and distinction to the people. Dedicated in our selfless quest to have the nation singing, dancing and making merry through some of the darkest times of the last four decades. There will be feasts, street parties extraordinary concerts of every shape and size up and down the nation. (All about Madness…)

We saw off 8 prime ministers, 12 England managers and a nasty bout of lumbago.

But, it’s not the endless achievements, not the unforgettable memories, it’s the fact we’re even still alive! (and miraculously in the rudest of health, thanks for asking.) Raise your glasses, lower your swords ‘arise sir madness!’ Get stuck in! Here’s to the next forty. XL” – Suggs, January 2019

Friends, mad heads and countrymen. Lend me your ears. This year will be the 40th anniversary of the groupus maximus MADNESS XL. And to celebrate, the country will be witness to celebrations of Romanesque proportions!

Madness have unveiled plans for another jam packed year, as 2019 shapes up to be one of the biggest yet for the legendary, evergreen, band. Fresher of face and fleeter of foot than ever.   It’s hard to believe 2019 will mark forty years since a rag tag of self-proclaimed ‘hoolies and urchins’ first emerged.  They were gloriously unreconstructed from the back streets of Camden Town fusing reggae, punk and pop on their classic album ‘One Step Beyond’. 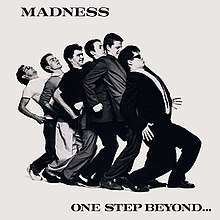 Now entering the 40th year of their near Imperial reign over popular music, 2019 sees a raft of activity.   Two very special shows have been announced. On June 15th, Madness will play the well heeled surrounds of Kenwood House for a true one-off.  They will perform a career-spanning set which will see the Nutty Boys joined live by an orchestra.  The combination of Madness and such salubrious surroundings will be a fitting celebration of one of the nation’s best loved songbooks.

Always a broad church, ‘Madness XL’ also sees the return of their glorious ‘House Of Common’ festival. Pitching up it’s wagons on Clapham Common on 26th August 2019, House of Common welcomes hordes of fans old and new to rub shoulders on the Common in the summer sun, bringing together all comers in the love of blinding music. What could be better. Headlined by Madness, the one day festival will see a wealth of great talent announced in the coming weeks.

Madness In The Studio And On The Page

Therefore, away from the live arena, a typically busy twelve months awaits, with Madness currently beavering away in the studio on new material for release later this year. In the meantime, 2019 also sees autobiography ‘Before We Was We’ emerging over the horizon. Released on 26th September on Virgin Books ‘Before We Was We’ tells the story of how Madness became Madness, how seven unlikely lads become one of the most successful British Pop bands of all time, tracing the bands’ individual stories up to the start of their meteoric rise in 1979. The story of how they became them. You’ll meet a loose gang of misfits and outsiders, travelling around in their Morris Minors, ducking and diving by day, and making their way in London’s exploding music scene by night.

However, this year of celebrations is the simply the latest stop in what has proven to be an astonishing few years for the resurgent British icons – 2016’s ‘Can’t Touch Us Now’ become the band’s tenth UK top 10 album, racing though gold status in the UK, carrying a raft of rave reviews aloft in the process. They sold more tickets than you could wave a stick at. They played more festivals than they can remember, including the main stage at Glastonbury. Suggs took his One Man ‘What a King Cnut’ stand up show up and down the country, raconteuring to the masses as only he can. Legendary documentary maker Julian Temple brought Suggs’ life story to the big screen with ‘My life Story’, and Lee Thompson skanked down memory lane with his cinematic documentary ‘One Man’s Madness’.

As a result, the tightly knit group has been woven into the very fabric of British life.  Landing somewhere between the Krays and Monty Python, lies the unparalleled story of Madness. One of the most successful pop groups ever. Consequently, this announcement shows once again, that they continue to defy expectations, trends and the aging process.

Here’s to the next Forty.

Furthermore, keep up with the band on Twitter here.

Alternatively, for more Music News, click here. On the other hand, if you are a musician head over to our new freelance marketplace www.soundfinder.co

He discovered the gem when he was 12 years old and still has it now, claiming it to be why he fell in love with music. He likes to play disc golf when he's not writing about music. He is a one-of-a-kind individual who is always the first to bust out his air guitar on the dance-floor.

George graduated with first-class honours in music journalism in 2012 and promptly found work in the music industry. Also, he has written about some of the world's most famous musical stories throughout his time at GSGM, which he joined in 2016.
Latest posts by George Millington (see all)

BRITs Week Shows Announced – The 1975, Jess Glynne & Anne Marie + More War Child BRITs Week Together with the O2 returns for its fifth year and strongest series of gigs yet. Fans...

Spice Girls ‘To Announce Reunion Today’ ahead of huge UK stadium shows The Spice Girls are reportedly set to announce their reunion later today, ahead of a huge stadium tour next summer. A video...

Muse To Perform Charity Shows In London Muse, the British rock band with a long history of winning live show awards, will perform at the Eventim Hammersmith...