Orchards stopped at the Brudenell Social Club on their UK headline tour amidst a busy summer of festival appearances. Steadily, their reputation is growing as the country’s most exciting math-pop band. Backed with positive praise from Noisey and CLASH following the release of their debut EP ‘Losers/Lovers’ and the later double A-side ‘Young/Mature Me’, the four-piece have blossomed from their early university days in Brighton into a musical force capable of effortlessly combining math-rock technical intricacies with irresistible pop elements.

Opening on the night was Leeds based Andy Crowder’s project, Piles of Clothes.. Influenced by Elliot Smith and Phoebe Bridgers, his set consisted of devastatingly beautiful solo songs with powerfully personal lyrics which quickly captivated the crowd. Although just as captivating was his charming stage presence, including his amusing anecdotes about the frivolous annoyances of office life.

Fellow hometown act, wormboys, then followed. However, the noise-pop act did so in a drastically contrasting dynamic. They cranked the amps up and the room soon filled with a thick wall of fuzz. However, they also showed off their song-writing ability with sincere vocal melodies in a pretty fun lo-fi set influenced by the likes of Pity Sex.

Orchards then made their way onto the stage. Without hesitation, the first taste of the effects heavy guitar and bouncing backline were heard in the intro to ‘Age Of You’. Subsequently, the crowd were instantly hooked on Orchards’ “glittery gateway drug” as they’ve previously been described. Lucy then quickly left the stage to dance frantically on the floor with the crowd.

There was an excited cheer when Sam ripped into the delayed guitar riff of ‘Honey’. Lucy’s pop hooks in lines like ‘Don’t you forget the sweet taste I left in your mouth’ are future sing along classics and it seems that increasingly larger crowds will sing these back to her in the future.

Up next was ‘Double Vision’. Swaggering drums and foot stomping bass led the song into more traditional indie territory. Following this the full band broke into what was one of the catchiest choruses of the summer of 2018. “I’ve been sleeping through double vision” will definitely be replaying in the crowd’s head for the next few days at least.

The hits from ‘Losers/Lovers’ continued to roll out. ‘Be Here’ showed off their ability to quickly change gears with the swooning choruses leading into rhythmically frantic verses. Although following this, the crowd were treated to two new songs. They definitely formed these from their successful blueprint of articulate lyrics and swirling layers of sound, which has developed into a signature sound for them. However the songs also showed an evolution in their song-writing ability. This brief taste of what is to come in the future suggests Orchards won’t be a one album wonder.

Following this was another technically brilliant guitar riff and irresistible chorus in ‘Young’. A highlight of this song was Lucy taking a moment to sit down on stage for the monologue bridge. It grew from spoken ponderings and built up with “I need you to shower me with kisses” into a final chorus and a big ending.

‘Darling’ then saw the return of dreamy guitar lines followed by a powerful fist-pumping chorus. The guitar effects were then on full show in the song’s bridge as swirling noise filled the room.

One of the highlights of the night came with early career fan favourite ‘Peggy’. Its jaunty beats and twinkly guitar riff would make bands like TTNG proud. It’s fair to say the technical brilliance of Orchards was very much on show here. Sam covered every inch of the stage without missing a hammer-on, while Lucy’s vocals were as crisp and effortless as on the studio recording.

They then closed with the opener from ‘Lovers/Losers’, ‘Luv U 2’. This allowed the crowd one last chance to dance along with the upbeat energy provided by the Brighton four-piece.

Orchards Slip Under The Radar

Operating outside of genre norms has seen Orchards slip under the radar of the traditional indie scene. However, they are steadily receiving more and more plaudits, and a summer of festival appearances may just thrust their glittery math-pop sound into the mainstream by the time we get a second album from them. Live performances like this will certainly go a long way towards making the country appreciate math influences with their indie-pop. 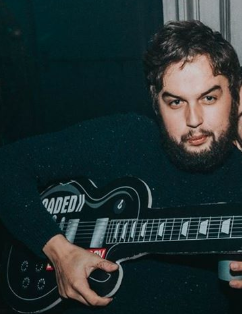 Follow Me
Sam Campbell
Review Journalist at GSGM - Email Me
Sam has contributed to GSGM since October 2018. He enjoys a wide array of music – especially Midwest/revival emo, indie and alternative rock. As well being a musician, a regular gig-goer and a collector of vinyl, he is also passionate about football, American football, history and literature.

Follow Me
Latest posts by Sam Campbell (see all)

Ed Sheeran Finds A Way To Stop His Nagging Neighbours

Adele Got Drunk, Relived Glastonbury And Flirted With Skepta

Justin Bieber Files A $20 Million Lawsuit Against His Accusers

Ed Sheeran Is The Singer The UK Listen To Most – Shock

Alexandra Burke Was Told To Bleach Her Skin